Data-driven creativity has a semantics problem

This morning, I came across a post from the Marketoonist, Tom Fishburne, called "The Tension of Data-Driven Creative." I clicked on it because it's a topic I have a strong point of view on. Lo and behold, the story quoted an article I had written months earlier in Ad Age on "Why Data-Driven Creative equals Mediocre Creative" arguing that basing all your creative on data is a recipe for sucky creative.

I stand by that statement, but Tom makes a really good point in his post.

If we’re not careful, this tension can lead to entrenched interests on both sides. Creative teams can be too precious with the “art” that they forget the purpose of the ad is ultimately to drive sales. Data scientists can stray from being data-driven to being data-blinded. 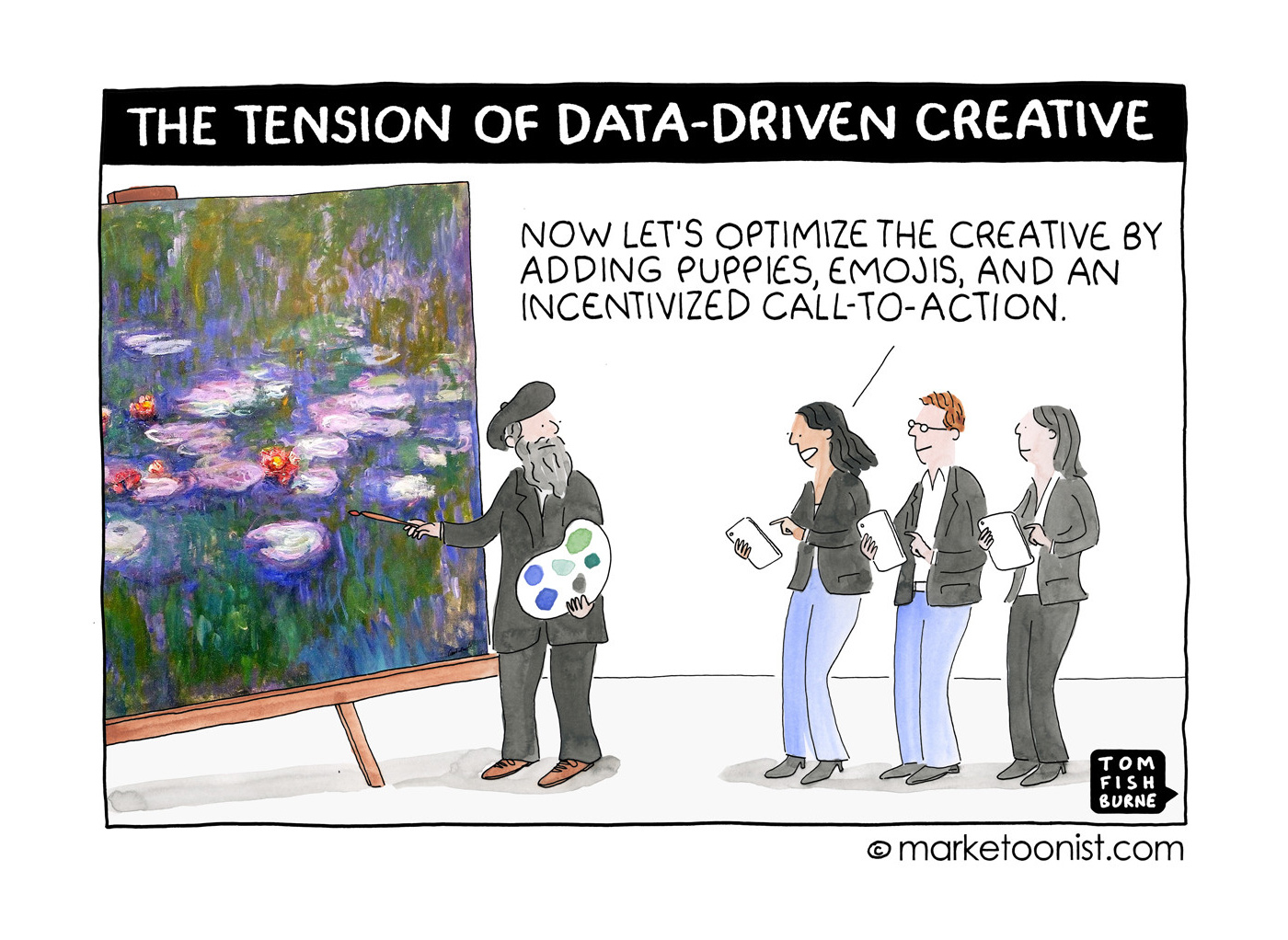 The reason this is such a chicken and egg topic is that we have a tendency to use words very loosely in the advertising business—and then defend our semantics with near-religious fervor and magnanimity. “Creative” is a a catch-all word used to describe everything from a Super Bowl spot to a banner ad. “Data” is used to describe an expanse of items from survey results to cookie pools tracking billions of browser sessions.

Which comes first? It depends on your output—and your semantics.

If you are calling banner ads run trafficked programmatic ad tech “creative,” I might first fervently and magnanimously tell you that you're an idiot because calling banners creative is like calling nail polish a fashion ensemble. As Ogilvy's Rory Sutherland recently pointed out in a piece on Campaign:

Do you think creative agencies are even involved in creating most of the ads you see online? Are we fuck. The media agencies produce it themselves as an afterthought.

But, then I’d readily agree that a style guide and a spreadsheet of messaging options to optimize will produce better ROI than a copy writer and art director trying to come up with creative ideas that inspire someone to “click here.”

On the other hand, if you’re developing ideas for an innovation or brand campaign—and, yes, ideas still hold the power to change fortunes for brands—data on its own is useless. Insight is the make or break factor that will determine if an idea breaks through or not. Creative without insight won’t create an emotional connection with consumers. It can still build awareness, but it likely won’t break through.

Data is often an amazing tool for identifying and substantiating insight and for that, hooray. If it makes you feel better to say, "Aha! Data-driven creative really is awesome," go for it.

But in my 20 years in the ad business, I’ve seen qualitative research much more effective than quantitative data at pointing to a new understanding of humanity that can inspire great work. Quant is better for validating it, but qual is better for finding it.

Want proof? Every friggin' company in the world is embracing the concept of Design Thinking to drive innovation, a methodology that has observation and human empathy at its core. According to Wikipedia (which is on the internet, so it can't be wrong),

And since we are talking about being data-driven, doesn’t it make more sense to use what has the highest likelihood of success in a given situation? I don't know if I can find a spreadsheet that backs that up, but the fact remains: it's basic math.